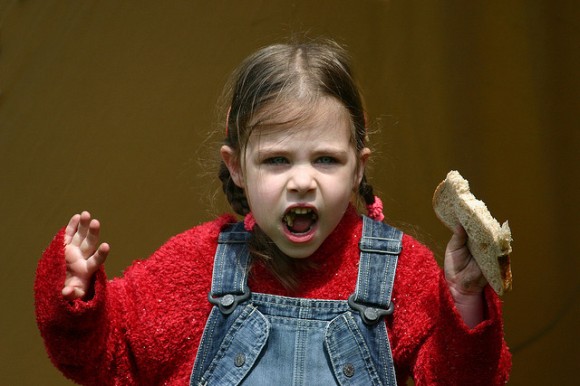 As I’ve said before, despite or because of being an SAT tutor, I’m not really into standardized tests. Still, some (like the Patient Autonomy Test!) are genuinely useful assessments.

In 2012, the National Foundation for Celiac Awareness (NFCA) tested the gluten-free knowledge of foodservice professionals attending a National Restaurant Association Show. According to this report, the results were abysmal. Under 50 percent of the restaurant pros could name a single gluten-containing grain other than wheat. That’s one test I wish chefs (and waiters, too) would invest a little time and energy prepping for.

Since you’re reading this blog, I’m willing to bet you can name more than one gluten-containing grain. But how much do you really know about gluten and its related disorders? If you’re brave enough, you can find out! The NFCA has come through with another quiz, this time with a different audience in mind: us, and our family and friends.

Rudi’s, everyone’s favorite grilled cheese maker (don’t tell Udi’s) is sponsoring the 10-question quiz and providing 10 gluten-free prize packs to quiz-takers. You get an entry even if you get a couple questions wrong—and you’re sure to learn a thing or two.

Take the quiz here, then challenge a friend to take it, too!

Why take the quiz (besides the prize packs)? To answer that, I look to another campaign by the NFCA, which urges us to “Restore your health. Reclaim your life. Take the pledge.” You can commit to take the pledge here, and it’s really simple: educate, empower, advocate.

At its most basic level, the pledge is about self-preservation. When you get diagnosed with a gluten-related disorder, you have to educate yourself in a whole new way of life, feel empowered to make the right choices for your health, and be willing to advocate for your needs in situations that demand it. (I wrote this as part of a testimonial I provided to the NFCA earlier this year. Read more testimonials here.)

I truly believe that the very most important thing we can do for our health is to learn about it, and after that, to educate others. If we don’t learn all we can about celiac disease, gluten sensitivity, and gluten, how can we expect people like chefs—or even doctors—to bother with it? Cheesy as it is, in the case of GRDs, health does start from within.

So what are you waiting for? Take the quiz, then come back and tell me how you did! I’ve modestly held out until now to say this, by the way, but—woohoo!—I got ’em all right.

As for the prize pack, I wish you some belated St. Patrick’s Day good luck. If you, like me, managed to get celiac disease despite having a 132 out of 133 (or about 99.25%) chance of not getting it, then you probably need some.

Have you taken the pledge? Does it resonate with you? Do you feel educated and equipped to educate others about the gluten-free diet?

[Disclosure notice: I was offered two free Rudi’s product coupons valued at $10 in return for posting about the campaign. Although I’m looking forward to the grilled cheeses—or maybe giving the coupons away to one of you—I’d have posted about this anyway in accordance with my strict post-about-stuff-that-is-interesting-to-me-at-the-moment-when-I’m-writing-it policy. I was not otherwise compensated.]

It occurred to me as I was dutifully packing my own lunch the other day that I’m getting pretty good at this. Maybe not Pinterest good, but I could definitely do a bento box. I’m totally ready to be someone’s mom!, I thought.

I started wondering what other overlap my GF lifestyle has with parenting, and I came up with quite a list. Can you relate?

See? Child-rearing and chronic disease, two of life’s enduring mysteries, are essentially the same. Both look just . . . like . . . this (with Snyder’s of Hanover GF pretzels, of course):

Yes, I focused on one particular set of symptoms (that is, mine), which many people with gluten-related disorders may not have; there’s a laundry list of other possible symptoms, including infertility (which makes becoming a parent a bit tougher, though certainly not impossible).

And, yes, there are some ways in which they differ. For example:

There’s one more, utterly crucial distinction: When you yourself are gluten-free, all that extra energy you expend and stressing you do are about YOU. Taking responsibility for your own well-being is admirable (and, for many of us, critical), but as a parent you must take that endless worry, attention to detail, and physical and emotional care and turn them outward.

If it’s your child who eats gluten-free, you already understand that. For those of us who aren’t yet but may become parents, assuming a cure doesn’t come, we’ll continue to manage our own diet while caring for the tiny human beings in our charge. We’ll be taking the “tired” we feel and doubling it, at least.

That, more than anything on the list above, makes parenting sound pretty intimidating. From what I hear, though, it’s pretty fulfilling work—so if anything is stopping you from having kids, I hope celiac disease isn’t it. Some (far-off) day, I won’t let it stop me!

Am I missing anything on my lists of similarities and differences? Parents, did I get any of this right?

Thanks and No Thanks: A Thanksgiving Game (with gluten)

Here’s a twist on Two Truths and a Lie to play at your Thanksgiving get-togethers this year: provide everyone with slips of paper and pens and have them write, on separate pieces of paper, one thing they’re thankful for this year, and one thing they’re not.

Collect the papers after a respectable amount of time (once all the Mary’s Gone crackers are gone and a few people have resorted to the veggie platter), and take turns reading them aloud. The group then tries to guess who wrote it, and whether he or she is thankful or unthankful for it. If you’re competitive, you can award points to those who guess right, and make the loser do the dishes. That’ll net you some thankful guests.

To get you started, here are a few examples from me. This year, I find I have many things to be thankful for. But there are others for which I’m shaking my fist at the universe. Go ahead…see if you can guess which is which. (Highlight for answers—the whole page at once, if you’re lazy.)

Celiac disease diagnosis
Thankful, I guess, though a miraculous recovery would’ve been better.

That I stopped biting my nails
Thankful.

That I stopped being a slob
Would be thankful, if it had happened.

My totally GF NYC apartment
Thankful. Although don’t ask me that at the bottom of the stairs.

That my apartment-mate (Sprue Jr.) got stuck being GF too
Not thankful! Boooo, universe.

The 2013 GFAF Expo in Secaucus and other events
Thankful.

The way my stomach felt after sampling way too many things at said events
Less thankful.

Getting nominated as Rookie of the Year in the 2013 WeGo Health Activist Awards
Super thankful! If you pop over and “endorse” me, I’ll be even more so.

The weight I lost by going gluten-free
Hahahahaha!

Amazon Prime
Thankful, but guiltily so.

Corn and Rice Chex
Ask my coworkers about the 16-box cartons of each that arrived to my attention courtesy of Amazon. Call it thankful but ashamed.

The gluten-free tax break
Ten months’ worth of lost receipts say no.

The FDA ruling on gluten-free labeling
Thankful. So good of them to wait till I was diagnosed to do anything.

The few restaurants I can actually visit without it being considered an act of self harm
I guess I sorta gave you that one.

Dunkin Donuts going gluten-free
I’ll believe it when I see it.

The miraculous power of the human body to repair itself
Check in with me next Thanksgiving.

Games aside (and not to get all sappy on you), I have more in this almost-a-year of being gluten-free to be thankful for than not. Oh, sure, would I give back the incurable disease, the copays, the media scoffing at my diet, the bagel crumbs in the office kitchen? Yup.

But I’m grateful to have loving and supportive friends and family members; to live in the golden age of gluten-free food; and to be here at my childhood home, surrounded with stockpiled gluten-free equipment and ingredients waiting to come together into a meal we’ll all be able to enjoy tomorrow (the low-carbers, veg-heads, hockey-puck cranberry saucers, gluten-freebies, and all).

Oh, and I know I said I wouldn’t get sappy, but one more thing I’m thankful for is:
You!

Happy Thanksgiving! What are you thankful and not thankful for this year?