20 Comments
By Molly Breadcrumbs in the wilderness

A tale of two cakes

The party in question was in celebration of my sister’s graduation and, secondarily, my twenty-fourth birthday. At such occasions where just one gluten-free eater is present, said eater might count him or herself lucky to have a quarantined corner of gluten-free snacks, or to be allowed to bring his or her own food. At this occasion, though, the hosts—my parents—went all out creating an entirely gluten-free spread, complete with TWO cakes. 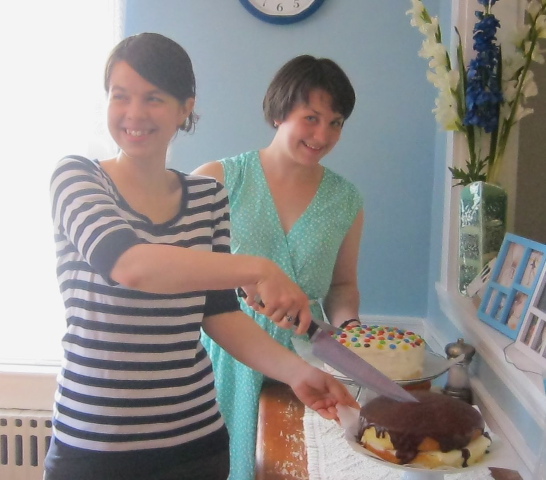 No, not one gluten-y graduation cake for Althea and a separate gluten-free birthday cake for me, but two gluten-free layer cakes made from King Arthur Flour gluten-free yellow cake mixes (and KAF cake enhancer). Since we didn’t do a taste test of one cake with the enhancer and one without, I don’t know how critical this ingredient was, but I can tell you that both cakes tasted and felt just like they should: like cake.

They were both vanilla, one with buttercream and M&Ms, and one with a cornstarch-based pudding filling and a dark chocolate ganache: a classic Boston Cream Pie gone oh-so-gluten-free. Just what I wanted! (My cake looks like it’s about to tip over in the photo, but I assure you that I cut the entire thing without the top sliding off—a feat that I undertook in grave doubt at my ability to achieve.)

We also tried the King Arthur Flour gluten-free cookie mix. Although we added lots and lots of chocolate chips, the consensus was these weren’t quite as impressive as the cakes. They were best right out of the oven, which is when I tried them, but I’ve been informed that as they cooled they became a bit crumbly and that they had an odd aftertaste. I’ve noticed an aftertaste in many gluten-free desserts I’ve tried and, after struggling to pinpoint its origin, I now blame the tapioca starch, which a gluten-free cookbook author I work with told me can have a metallic taste, depending on its source. Have you noticed a metallic aftertaste in your GF goodies? Do you blame the tapioca?

I started with dessert because it’s always the most important thing, but let’s pause for a moment to discuss the second most important thing: avoiding cross-contamination. My parents don’t have a gluten-free kitchen, but they did go to great lengths to make food that was safe for their invalid offspring:

My mom has been insisting that when I write this post, I be absolutely ruthless in laying bare all of the things they didn’t do right, but to be honest, I don’t have much to complain about. To appease her, though, here is the run-down:

All in all, the party planning gets an A from me.

Along with dessert, we had an array of intriguing gluten-free chips and crackers (Boulder Canyon hummus & sesame chips, Eat Your Vegetables sea salt chips, Wild Riceworks crisps, and tortilla chips), dips and cheese, and a beautiful spread of gluten-free salads, including one brown rice and wild rice salad which was, I think, the first wild rice–based salad I’ve ever really liked.

It was a tasty springtime spread full of great fruits & veggies, nuts, beans, and grains, and many of the guests were surprised to learn such a varied menu could be entirely gluten-free. Mom’s qualms aside, it was a fun, delicious, and—dare I say it—educational gluten-free party.

As for which cake was best? M&Ms are fine, but obviously it was my favorite, the Boston Cream.