No one knows anything about celiac disease. Do you care?

On second thought, I’ve already talked enough about celiac awareness. So let’s skip the talking and just draw it. 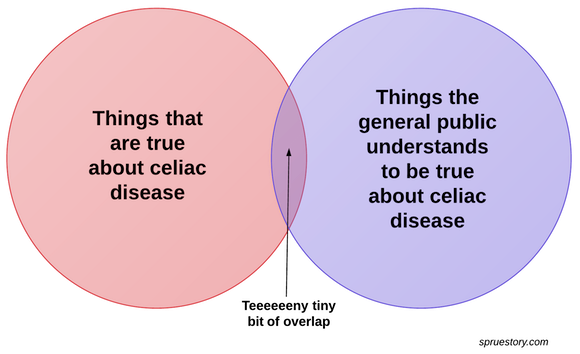 Lots of people think they know a lot about celiac disease. When you say you have it, they nod knowingly, and you feel warm and understood and accepted and then—BAM—they hit you with, “It’s like lactose intolerance, right?”

The hopeless among us feel we haven’t made much progress in this regard. To them, ’tis the best of times and the worst of times: the age of gluten-free product development, but the age of celiac disease ignorance. As proof, they point to a Google Trends graph (below) illustrating the difference between growing interest in “gluten free” and static interest in “celiac disease.” 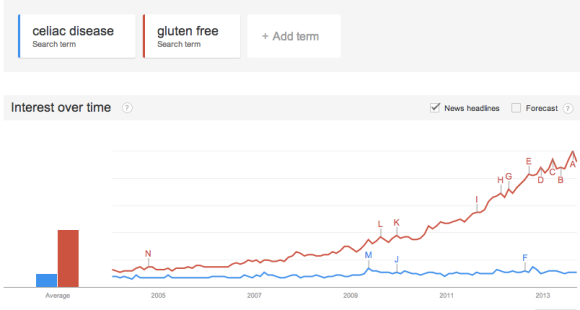 It’s…not a pretty picture. But, if I may remind you, Google has not existed forever (I know, it shocks me, too). The graph captures data only from 2006ish on. And all the anecdotal evidence I’ve heard tells me that, before then, celiac awareness was even worse.

Twenty or thirty years ago, for example, the original diagram may have looked more like this: 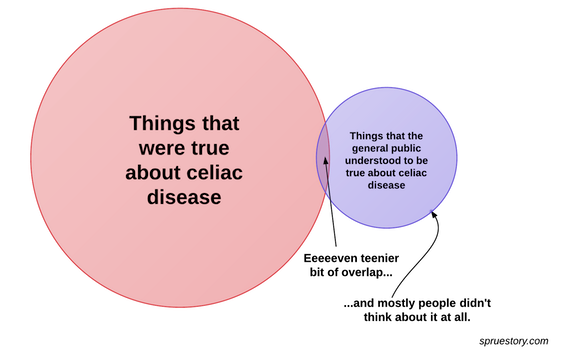 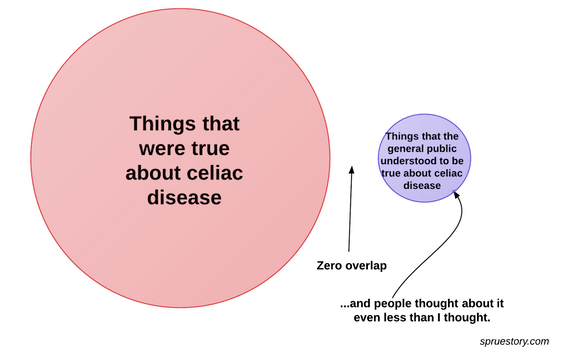 I mean, we’re talking the banana diet, and the widespread belief—by doctors!—that one can “grow out of” celiac disease. People used to know NOTHING! Now, at least they know celiac disease is a gluten allergy. (Wait…hang on…is that…?)

Sure, you still hear stupid things said about celiac disease. And, if you’re anything like me, it makes your blood boil. In the interest of our collective blood pressure, though, I suggest that we calm down. We can’t get worked up over every instance of ignorance, or we’d never have time for anything else.

Let’s ask ourselves: In the end, does the general public’s knowledge really matter, as long as the folks involved know what they need to know? Maybe not.

Still…those folks have some awareness issues, too. 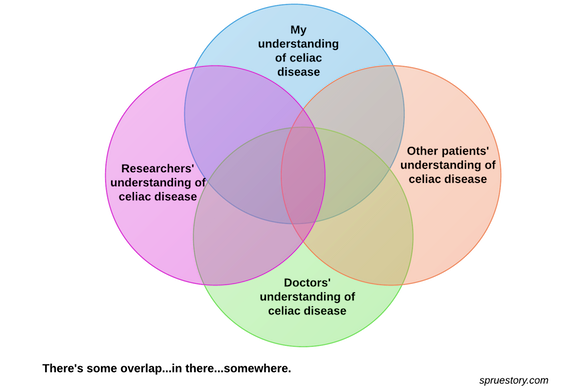 …but on bad days I think it’s more like:

…with chefs and waiters off in their own little galaxy far, far away, where high temperatures cook off all the gluten and just a little can’t possibly hurt.

I don’t mean to diss doctors, or researchers, or other people with celiac disease (though we all have our brain-fog moments). I don’t even really mean to diss restaurateurs. I just know that it’s hard to keep up with everything there is to know about this disease. It’s only just beginning to be well researched, and misinformation gets picked up and passed on in endless games of telephone with no winners.

Plus, it’s hard—for all of us—to understand precisely where others are coming from. Our personal experience walls us away. Even other people with celiac disease don’t necessarily get me, and vice versa. There’s so much variation in this disease; there are so many unknowns. 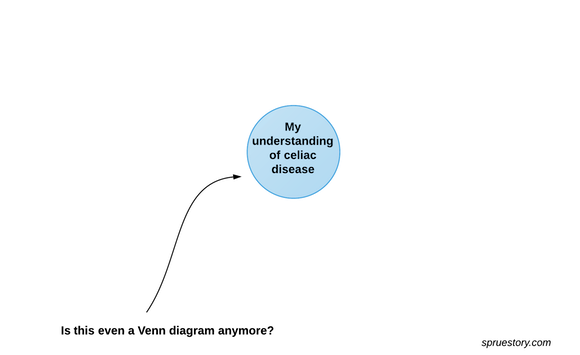 Feelings aside, though, I’m not in fact alone. I have my family, friends, and colleagues who have worked to raise their own celiac awareness; my whip-smart, fellow celiac sister; my doctor at the Columbia University Celiac Disease Center; and, of course, all of you in the celiac/gluten-free online community.

I’m not alone, and you’re not alone, either—at the very least because you have me. And if you and I keep on standing up for ourselves, speaking the truth, and supporting each other, then one day—I’m confident—we’ll end up with this: 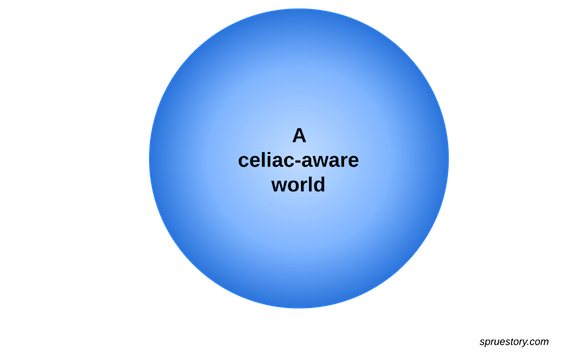 I’ll see you there.

Happy National Celiac Awareness Day, y’all. I hope everyone you meet today knows the difference between “gluten-free” and “vegan,” and that you don’t feel alone for a moment. If you’re non-celiac gluten-sensitive or have allergies, other food restrictions, or other invisible illnesses, know that my support extends to you, too.

By now, I think just about everyone I know has shared this New Yorker comic with me: 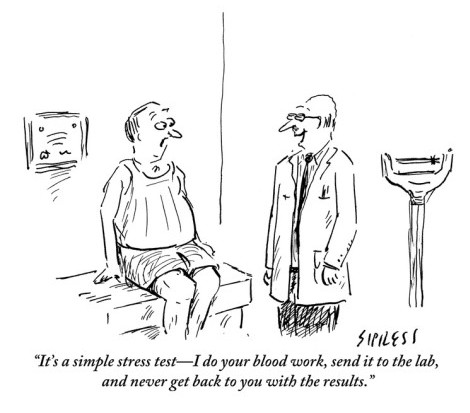 Okay, fine, it was only about five people, but I still find that significant. Of all the New Yorker comics that exist and of all the neurotic people that could jump to mind upon seeing them, this comic puts my friends and family in mind of me.

Recently, I watched the movie Romantics Anonymous (Les émotifs anonymes) with a friend. (The movie is very sweet, and French, and available on Netflix, so if you’re into romances about socially anxious people and chocolate, check it out.) In it, a character claimed that the three most stressful situations in life are moving, weddings, and exams.

My friend wondered, “Are exams really that stressful?”

She replied, “You would say that.”

Recently I underwent a new medical exam of my own, and alongside it my usual trio of Stressing, Obsessing, and Second-guessing (yes, that’s SOS for short).

Properly dealing with this detail, I learned, would involve time travel. I stressed about not knowing how to time travel.

For the rest of the week: I continued to stress about the insurance, making phone calls to two different doctor’s offices and to the insurance company and not knowing what to say once I got on the phone with any of them.

To one, I said, helplessly, “I feel like the middleman here; I don’t know what I’m talking about,” to which she replied, “You are the middleman. You’re the patient!” I also said, to the same receptionist, “I’m only twenty-three!” Poor thing, she had no idea she was in for an impromptu counseling session, but she handled it well. Maybe twenty-three isn’t that young, considering in some places and times I’d have several children by now and be managing a household. Be that as it may, it’s true: I had no idea what I was doing. And it was stressful.

When I got the results: I compared my chart to others online and stressed over whether my doctor had gotten the diagnosis right. Those graphs don’t look the same! I thought. The peaks aren’t right! I stressed about taking a potentially unnecessary antibiotic. I stressed about my insurance’s prescription coverage. I read studies, second-guessed my doctor’s choice of antibiotic, then worried that I wouldn’t hear back from the pharmaceutical company before the weekend to learn whether my new tablets were gluten-free.

Now: The test is over! All I have left to stress about is whether I’m taking my antibiotics with enough time before and after meals and between doses and with enough water and without lying down within the next 10 minutes—why is that?—and without forgetting a dose. I’ve woken up several mornings convinced I’d forgotten to take it the day before (no wonder I’m having nightmares).

Oh, and if all that’s not enough and I feel myself entering stress withdrawal, I can always stress about whether or not any of this will do me any good.

Or about how stressed I am.

Tell me how you deal with stress, and your thoughts on the top three most stressful situations in life. Do you too Stress, Obsess, and Second-guess?

If you’re looking for more on medical stress tests, the fine ladies behind Breaking Up With Captain Crunch and Sassy Celiac have both written hilariously about their colonoscopies—fun!

Do you dream in gluten?

If so, maybe you’re familiar with this nightmare: Someone presents you with a plate of cookies and tells you they’re gluten-free, then after you’ve eaten several… 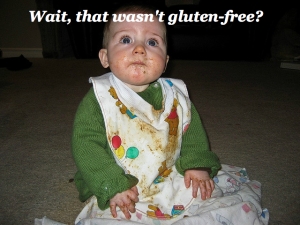 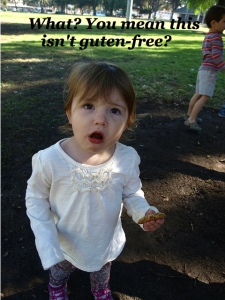 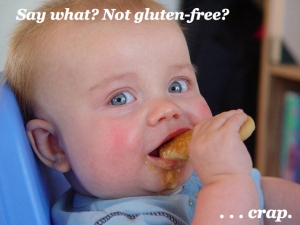 My first-ever gluten nightmare was like that (but without the adorable baby photos). I think in the dream it was my mom who gave me the cookies—sorry, Mom, I know you’d never really do that!

Last night I had a new one: I dreamed I ate a box of Triscuits. When someone pointed out Triscuits aren’t gluten-free, my dream self was baffled. “I just…forgot!” she said.

And, of course, there’s the ever-recurring waking nightmare of the newly diagnosed: It’s a year from now, and my doctor is showing me my chart and saying, “Turns out, you’re an asymptomatic celiac who just happens to have lots of other stuff wrong with you!”

Luckily, even after a sleepless night, cute photos of children eating cookies always cheer me up.

Tell me your gluten nightmares! And if you’re dozing off at your desk this Monday morning, here’s wishing you sweet but gluten-free dreams.

As it turns out, celiac disease was invented by the sponge companies. 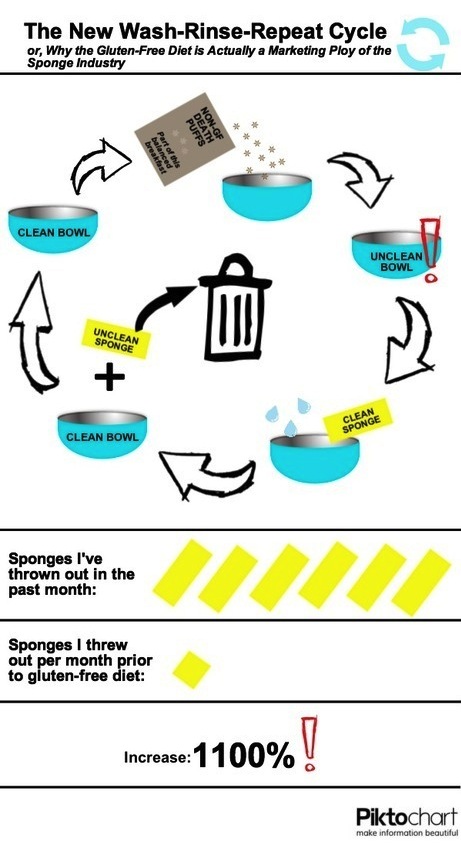 Of course, the dishwasher manufacturers aren’t making out too badly, either.

Which do you use? Dishwasher, or elbow grease and a prayer? Do you, too, get twitchy if you so much as drop your gluten-free sponge into the gluten-full sink?

Am I overdoing it? Or underdoing it?—should I simply use only my own dishes for everything, regardless of material?

What incidental, non-food costs have shot up for you on a restricted diet?

By the way—in case you were wondering, the image quality isn’t bad; your eyes are. My math also isn’t bad. I hope.