I’m about to make some easily-angered people really angry, but I can’t help but say this: scorpions are disgusting. I know they’re the symbol of the Gluten-Free Scorpio, but I can’t look at this Flickr feed for another second. Here, take this horrifying picture of a scorpion on a keyboard.

Now that I’ve gotten that out of my system, let’s move on (if we can—Scorpios rarely do). This month is all about the GF Scorpio, and since you Scorpio types love spirituality, the occult, exploring the mysteries of the universe, I’m sure you’re pumped.

I could be wrong about that, though, because Scorpio is apparently the most commonly misunderstood zodiac sign. This makes sense, because the Scorpio I know best has never really struck me as controlling, jealous, brooding, turbulent, or dangerous. Guess Mom has just been presenting me with the “calm and smiling face she shows the world” all my life. I also never realized she was psychic.

On the other hand, any Scrabble or Words With Friends opponent would confirm that “fierce competitor” sounds about right. As far as psychic goes, she did usually seem to know, even from upstairs, when I was leaving the house without a coat.

Since I now know my mother has been hiding a vengeful, easily-enraged side, I’ll move on now lest I offend. Anyway, my dear envious Scorpios, you probably want me to focus on offending YOU. Here goes.

The GF Scorpio can be a bit obsessive and micromangerial, but is also flexible enough to rapidly adapt to (and gain control over) new situations. Obviously, therefore, you’re pretty good at this gluten-free thing. You may not have been particularly phased by learning you’d have to do it.

You believe in destiny, making you less likely than any other sign to rebel against the inevitable or go hunting for reasons why you can’t eat gluten (like birth month or breastfeeding…sorry again, Mom). But accepting it’s meant to be doesn’t stop you from aspiring to more. Imagination and persistence come together in you in just such a way as to convince you that your raised consciousness of gluten has also raised you to a higher purpose. You want to feed the gluten-free hungry (all of them), or rid the world of celiac ignorance (all of it), or find a cure for celiac—singlehandedly, of course. Magnetic, passionate, and just a bit domineering, you just might manage it.

When you care about something, you tend to dig deep, commit fully, and get your way. This month, try not to fall prey to a typical failing: wasting your energy on matters not worth it. Sure, you could spend your time convincing your local supermarket to stop shelving the Bob’s Red Mill vital wheat gluten in the gluten-free section, or running a smear campaign against the manager who rolled her eyes when you first made the request—and I’m sure you’d succeed in both. But could you not aspire to more?

I certainly hope you will, since your passion is an asset our community can’t afford to lose. Though you’re well known as a grudge-holder, you also remember and repay the favors you’ve been given. This month, look back on the times you (yes, even you) needed help from our fabulous community. Remember to give back. 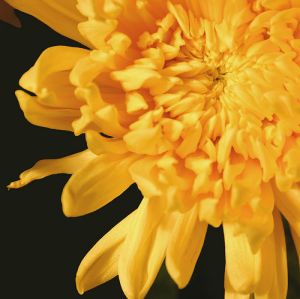 One of your associated flowers is the chrysanthemum, which is a whole lot prettier than a scorpion.
Photo © Alex | Flickr

By the way, since you’re into this sort of thing, your magical birthstone is the topaz. It protects against enemies (fortunately, since you tend to make them) and illness (also fortunate—just think how many diseases you would have had on top of the one[s] you already do, without the help of your birthstone).

Your ruling planet is Pluto, god of the netherworld, so this month, though it’s a bit awkward, I must caution you to watch out for your…ahem…nether regions. Urinary tract infections are more common in folks with celiac, as is hyperoxaluria, and in GF Scorpios, the situation’s even worse. Luckily, cranberry juice is gluten-free.

Tons of visionaries, leaders, and all-around great people are Scorpios—GF to a greater or lesser degree. Hillary Rodham Clinton, for example, has been known to indulge in a gluten-free (vegan) cake in deference to her husband and daughter’s “gluten allergy,” as an NFCA brief delicately put it back in 2012. Whoopi Goldberg shows no signs of going gluten-free but did find it in her heart to enjoy the GF pulled pork her old cohost Hasselbeck made for her (though isn’t pulled pork usually GF?). Finally, Meg Ryan‘s character in When Harry Met Sally is an icon (or nightmare) for special-diet restaurant guests everywhere.

Here are a couple more GF Scorpio celebs to prove how successful y’all are:

And that’s it from me. If you or a friend are a gluten-free Scorpio, please share!

GF Scorpios, please direct all death threats for revealing your secrets to the comments section. Any and all other feedback is welcome, too.