I can hardly believe it, but we’ve made it through an entire year of gluten-free astrology! We started with bold, optimistic, energetic GF Aries, and we end, of course, with depressive, lazy, self-immolating GF Pisces. Aw, just kidding, you’re only those things some of the time. 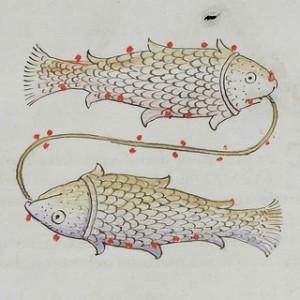 On the more positive side, if you’re a GF Pisces, you’re well known for your intuition: gluten-free pals turn to you for advice on whether to try that new restaurant that says it’s gluten-free-friendly, and a certain rumbling in your tummy can always tell you if they’re in for a glutening. Woe betide those who ignore your hunches, because there’s a decent chance they’re actually supernatural (if you believe in that sort of thing—which, being a Pisces, you probably do).

On the other hand, those friends who do wind up sick after an outing can count on you to be by their bedside, nursing them back to health with nothing but sympathy for their plight. You’re deeply compassionate and empathetic, not at all an “I told you so” type.

Most unfortunately, despite their keen powers of perception and willingness to care for others, GF Pisces often lack the self care skills necessary to keep themselves out of gluten’s way. You hate to say no and therefore often head out to eat at places you know aren’t safe for you. Your loyal and generous spirit might even lead you back again, tempted by managers’ assurance that they’ll make things right this time. Sometimes, they really do. Other times . . . well, I think you can fill in that ending yourself.

To compound the problem, you have a distinct tendency to overindulge in the good (and bad) stuff, which might mean you wake up not only glutened, but hungover to boot. Bummer.

A dreamer but not a schemer, the GF Pisces is unlikely to be an enterprising businessperson in the gluten-free zone. You could, however, probably write a lyrical chapbook or compelling novel about your celiac experience, if you could ever get up the energy to do it. Maybe this month is the right time; I don’t doubt we have a snow day or two left in store when you might find the time to pick up the pen. Of course, in your day-to-day life, you also do your part as a one-man support system for your gluten-free friends in need.

A handful of your GF Piscean brethren?
Photo © theimpulsivebuy | Flickr

Your ruling planet, Neptune, is god of the sea, and your sign—mirror-image fishes tied together (makes it hard to swim)—and special colors (sea green and turquoise) link you even more to the water. So if you’d ever like to pamper yourself in a relatively healthy way for once, consider booking a spot on a gluten-free-friendly cruise. There’s a surprising number of them available, if the Internet can be believed. (If you book a ticket, take me with you!)

Extremely emotional and changeable, there’s a fair chance you suffer from mood swings or even full-on bipolar disorder as a result of your celiac disease. At the very least, you’ve been known to shed a tear outside of a pizzeria or cake shop . . . or even just at the thought of your old favorite. That’s when your active imagination isn’t much fun.

Speaking of the old imagination, many of your fellow Pisceans are artists and dreamers. Here are a few to be aware of:

Well, folks, that’s everyone! I’m not sure whether I’ll be continuing this series in another form after this—maybe you want me to start in on romantic pairings (ooh la la)—but I hope you’ve enjoyed the tour through the cosmos as much as I have.

From now on, if you have further questions about the stars, you’d better direct them to your local GF Pisces. If that’s you, you can volunteer your services in the comments.

Do you wear your snake-eating-a-unicorn tattoo on your sleeve? (Or, do you call yourself a “celiac”?)

Does illness define you? I’ve joked about this before, but it’s worth serious consideration. How much of a part of you is your health? And how much should it be?

Plenty of people identify with their illness enough to name themselves after it: diabetics, celiacs, Crohnies, Lymies, spoonies. The use of these names is vehemently opposed by others who consider them dehumanizing. “You wouldn’t call yourself ‘a cancer,’ would you?,” they prod.

It’s a fair point, although many do call themselves “cancer survivors”—another way of identifying themselves by their disease. (Also, according to Wikipedia, some folks with terminal cancer reject this name in favor of cancer “diers.” I was unable to independently verify the name is used by anybody outside of Wikipedia. Have you heard of this?)

And in between you’ll find lots and lots of people totally confused about how much to participate, what to call themselves, and how much to allow their condition to matter in their lives.

Diagnosis identifies the disease, but we have to decide, afterwards, how to identify ourselves.

Author Hilary T. Smith, in her book Welcome to the Jungle, suggests diagnosis is like waking up one morning to find “a big old snake-eating-a-unicorn tattoo” on your bicep.

Seeing the tattoo, she writes, you might react in several ways:

I was unable to find an image of a snake-eating-a-unicorn tattoo, but I did turn up this snake-fighting-a-badger tattoo that I am thinking about getting sometime.
Photo © BreadnBadger | Flickr

Underidentification: “Ho ho ho! This is surely but an amusing temporary tattoo placed on me as a prank. It will certainly wash off in the shower.”

Medium-Low: “This tat is real, but I am going to wear long-sleeved shirts for the rest of my life to cover it up.”

Medium-High: “Short sleeves for me, baby.”

Overidentification: “This tattoo defines me, man. I’m going to tattoo the rest of my body with snakeskin and have a horn surgically implanted on my head.”

The book is about bipolar disorder, which I myself don’t have (and no, I’m not just underidentifying). Still, especially as I got to the end of the list, I knew this applied to me.

Although I prefer not to call myself “a celiac,” I do give celiac disease, and being gluten-free, a lot of space in my life and identity. Sometimes, I wonder whether I’ve given it too much.

For example, when I renamed my Twitter handle @spruestory, I wondered if that was taking it too far. I mean, that’s my only Twitter handle, and it’s now named after my celiac disease blog. Was this really how I wanted to “brand” myself? Would I look back one day and wish I hadn’t?

Clearly, I decided it was worth it to change the handle (and that Twitter isn’t worth so much existential angst). After all, I’ll have this disease for life, so I doubt I’ll be looking back five, ten, fifty years from now and thinking, “Gee, I wish I hadn’t told everyone I had celiac disease.” Unless the whole world goes gluten-free or they discover a cure, five, ten, or fifty years from now I’ll still need to be upfront about my disease. I’ll still need to announce it on dates, to new friends in response to dinner invites, to strangers at restaurants before I order, to bosses and colleagues at work. It may not be the first thing I’ll talk about, but it will come up.

But will I one day wish I hadn’t talked so much about celiac disease? Will I wish I had identified with it less? Maybe. I wish it already, sometimes. But, as I said, this disease is for life, so I’ve got plenty of time to figure it out. Until I do, I think I’ll stay far away from tattoo parlors. No snakes, unicorns, badgers, or Xed-out sheaves of wheat for my bicep, thank you very much.

What about you? What do you refer to yourself as? Where do you fall on the snake-eating-a-unicorn identification spectrum? Has that changed over time? Are you happy with where you’re at now?