Since I missed posting my usual personality analysis, predictions, and advice for gluten-free eaters born under the sign of Capricorn back in December, I’m mixing it up this time with a special double edition of Gluten-Free Astrology.

I’ll cover all the need-to-know facts about Capricorn and Aquarius, then we’ll play a little game with celebrities. Got a goat or a water-bearer in your life, or are you one yourself? Then read on!

Capricorn’s symbol is the goat, and there’s a good reason for that. GF Capricorns are surefooted, able to pick their way over obstacles to reach whatever peak they’ve set their sights on. Like Virgos, Capricorns are organized creatures who set goals, make plans, and proceed steadily toward them. 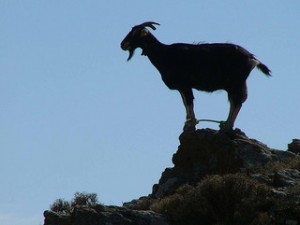 But Capricorns’ ambitions are often higher than Virgos’, and always less negotiable. While a GF Virgo might set up a safe, tidy, 95% gluten-free kitchen and allow his/her family to keep eating Triscuits, the GF Capricorn—uncomfortable with ambiguity—won’t rest until every last crumb has left the building.

You’re diligent, practical, and as stubborn as a Taurus, which combine with your rigid sense of organization and clarity of thought to make you, as I’ve said before, basically the best sign ever at being gluten-free.

Self-sufficient, you may volunteer to handle the food at professional and social events, but after painstaking preparations you have trouble letting go and enjoying the secure gluten-free party you’ve planned. Others may see you as distant or even controlling, especially when you’re slapping their hands away from your tortilla chips. Naturally a loner type, Capricorns risk becoming even more isolated once diagnosed with a gluten-related disorder—too bad, because inside, you honestly long to be loved. Spend this month working toward your goals, for sure, but don’t be afraid to make companionship a priority, too.

Like our friends, the GF Capricorns, you can be obstinate when you’re sure you’re right (and, since Aquarius is the Ravenclaw of the astrology world, you’re right annoyingly often). Also like Capricorns, Aquarius can come off as distant—in your case, because you really do prize independence over all else. For the most part, the similarity ends there.

Where Capricorn is steady, Aquarius is zany, constantly changing directions and cooking up wild schemes. You’ve probably had so many gluten-free business ideas, you’ve lost count. Maybe you’ve even tried to make some a reality: tossing ideas around and getting to know potential clients is lots of fun. Tying yourself down longterm? Not so much.

The GF Aquarius is outgoing, a traveler, and willing to experience just about anything other than boredom. You love learning and sharing ideas and information: your sign, the water bearer, represents that passion. If anyone can manage to enjoy going gluten-free, it’s you: learning all that new lingo and science, mastering the baking learning curve, and enlightening everyone you know about what exactly is a “villus”? A fascinating challenge!

You trade tips with every gluten-free person you meet, put your rapier wit to work when someone criticizes our lifestyle, and try all the new restaurants. (You might get glutened more often than average, but for you, that’s part of the journey. Yeah, you’re a little odd.)  There’s a decent chance you’re a gluten-free blogger—and, if so, you’re very good at it, besides a slight tendency to overestimate your own expertise.

When it comes to health, GF Capricorns suffer from stiff joints, rheumatism, and orthopedic problems. GF Aquarius struggles with arterial troubles, as well as shin and ankle sprains and breaks. I probably don’t need to tell you these are all symptoms of gluten-related disorders.

Now, time for a pop (culture) quiz. Here are a few well-known faces, some Capricorn, some Aquarius, some gluten-free, some not. Take a stab at guessing who’s who, then scroll down for the answers.

Hope no one minded the double feature! (I’d never get away with it for Leo.) Next month is Pisces, the last in the rotation—hope you’re looking forward to it as much as I am.

Capricorns and Aquariuses (Aquarii?), duke it out in the comments, and if you liked the post, please share.