My first post about Columbia’s celiac disease symposium was heavy on snacks, light on facts. That’s partly because, as I mentioned, many facts are undiscovered. But also, under the residual influence of my sugar high, I got a bit carried away and didn’t make space for what I did learn.

The comments on that post made it clear I’m not the only one interested in medicating my symptoms into oblivion, and just as clear that many have serious reservations about the idea. So, I thought I’d circle back to a few more questions about the celiac disease medication options being developed:

In other cases, modifying your diet even more can help. You may be inadvertently consuming gluten. You may have other sensitivities—most commonly lactose intolerance—or allergies. You may need to go low-FODMAP (more on that to come). And you need only glance at the “new and popular” gluten-free cookbooks on Amazon to see how many GF people are deciding to go paleo.

Interestingly, several bigwig doctors at the conference claimed to have no idea what paleo is. A fellow attendee asked about it, and they shrugged the whole thing off as a passing fad beneath their attention. 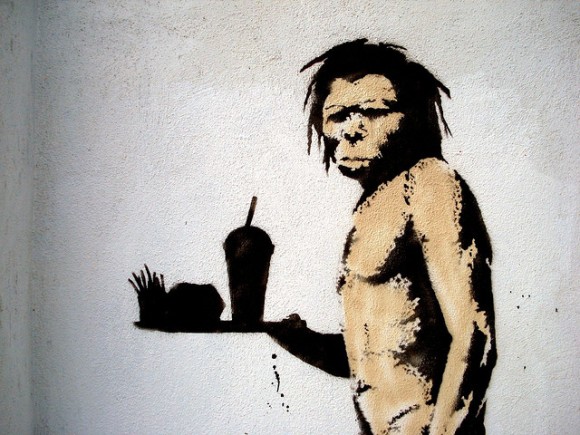 Banksy doesn’t know what paleo means, either. But he’s not my doctor.
Photo © Lord Jim | Flickr

As a vegetarian, I’m far from espousing the paleo diet, but I find the doctors’ cavalier attitude absurd, considering how many of their own patients must be going paleo, and the diet’s striking similarity to the “gluten contamination elimination diet” that has demonstrated success in one small study, in which over 80% of patients with ongoing symptoms became symptom-free.

Both diets require cutting out grains, legumes, and processed foods. What sets them apart is philosophy: paleo is about changing your diet for life, with the idea of eating the way we evolved to eat; the GCED is about restricting your diet for a limited time to target a specific issue. (In the study, many participants returned to a “standard” gluten-free diet after six months, without new symptoms.)

In my opinion, both diets, as well as their offshoots (e.g., The Wahls Protocol) should be of interest to doctors engaged in treating patients with non-responsive celiac disease. But at the conference, inexplicably, no one addressed them. So if you were wondering what we know about going grain-free, the answer may as well be nothing.

Anyway. Back to drugs. Who needs them?

Well, we can say who doesn’t: anyone without lingering symptoms, anyone with symptoms who has already found a solution, and anyone who feels the symptoms they have aren’t worth the trouble of taking a pill.

Even when drugs are available, it’ll be your right to be suspicious of them, and certainly your right not to take them. But consider this: the main arguments against taking medication are:

As for medication side effects—who knows? But the drugs currently being developed are meant to target gluten, not the body, so their side effects may in fact be less severe than those of the diet. Not many things affect us on more sides than diet does.

The panel of reps from Glutenase, Larazotide, and Immusan-T, gave some very slippery answers to this question: “no way to know”; “too many variables”; “developing a drug is a marathon”; and so on.

The moderator, much to his credit, insisted on pinning them down: “Assuming things go reasonably—not miraculously—according to plan, when can we expect these drugs to hit the market?”

One drug representative gave a very flip answer to this question (perhaps indicating a lack of confidence in his ability to answer it). Another seized this opportunity to lean forward and intone, directly into the mic, “Three years.” That set the bar: the other two grudgingly agreed that three to five years should do it.

That’s not so far off (!), but we do have some time to decide whether we want to take medication in addition to our diet.

Why not talk about it now? What worries you about drugs? What doesn’t? What else have you tried or are you thinking of trying? And why don’t docs care about cavemen?