18 Comments
By Molly Never too many cooks in the kitchen

How I accidentally terrified my peanut-allergic friend 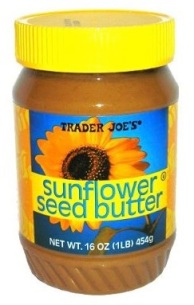 …and you can, too—not that you should—in three easy steps:

I have a friend, whom I’ll call B., who is allergic to peanuts. When I discovered that sunflower seed butter (or sunbutter) has a taste and texture like peanut butter’s, I was surprised to learn B. had never tried it. No peanut butter and no peanut butter substitute? How did he live?

Sprue Jr.—that’s Althea, who thought she should have a special name on my blog, and should be more careful what she wishes for—loves peanut butter, too. We always have a jar in the fridge, and we sometimes even make our own. (Lightly salted Planter’s peanuts make the best peanut butter ever, and if you add in pumpkin puree and pie spices, it’s all over.)

So, at a party we threw, we decided to show B. what he was missing. We made all the food not only vegetarian and gluten-free, but also peanut-free, tree nut–free, and soy-free (because a soy-intolerant friend of ours was also attending). We wanted to ensure everyone could try everything, without feeling nervous. It’s just nicer that way.

Now, buying groceries with gluten in mind is annoying enough, but this was harder still. I’ve never been more grateful for my smartphone. I scrutinized package labels and manufacturers’ websites until I thought my eyeballs would fall out and roll away down the aisle. It seemed every brand of chocolate that wasn’t processed alongside wheat was processed alongside nuts—or, failing that, contained soy.

Once I had found acceptable ingredients and resecured my eyes in their sockets, Sprue Jr. and I had a wonderful time rolling slightly-too-warm sunbutter balls around in not-really-tempered chocolate. By the way, the forks method only works for the first dip.

Despite the not-fit-for-the-Cooking-Channel preparation, the buckeyes, once set overnight in the freezer, tasted perfect. When I carried the desserts platter around at the party (to collect the oohs and aahs and you-MADE-this?s), I thought B. would be thrilled.

Instead, he took the candy with trepidation and said, “It smells like peanut butter.”

Silly me, I nodded enthusiastically. Sprue Jr., who was standing by, did too. We know!, I suppose we were both thinking. Isn’t it great?

“Are you sure there’s no peanuts in this?” B. said, and it finally dawned on me he was nervous. We assured him it was safe—not processed alongside nuts or anything—and he took a bite.

“It feels like death coating my tongue,” he said.

Crestfallen, we began a chorus of apologies and oh-nos.

“No, it’s good,” B. continued, “but it tastes just like what I imagine peanut butter would taste like.” Later that evening, he exclaimed—more than once—that he couldn’t believe he wasn’t dead.

He later elaborated, in email,

At the time it felt really strange…I had this visceral sense that I was eating poison. Whenever I smell peanut butter there’s this burning in my nose—not because of an allergic reaction, I don’t think, but my body just knows it’s poison, and it mixes my immune system with a fear reaction and the adrenaline starts pumping and I just know something is terribly wrong. And sunbutter smelled exactly the same way to me, or at least my body had the same response, so it was hard to force myself to just eat it…

Of course, I didn’t intend to scare B., or make him feel like he was being poisoned. All I wanted was to share something I enjoy with him, the best way I could. But he hasn’t had sunbutter again since the party, and though he said that the aftertaste was clearly sunflower seeds, not peanuts, and that he’s not opposed to trying it again, he clearly didn’t respond with the “here’s what I’ve been missing all my life” sense of joy I’d been expecting.

The experience showed me how different it is to have celiac disease, diagnosed in my twenties, than to have anaphylactic food allergies from birth. There are specific things I have happy memories of eating, and therefore want to recreate now. For someone who has never had anything but scary or painful memories associated with a food, there’s understandably less reason to find a substitute. And, although I can certainly relate to being nervous that something I’m eating might turn out to contain gluten, accidental peanut exposure poses a more immediate risk for B.

The lesson here is this: If you, like me, love peanuts, and have a friend who can’t eat them, by all means make and serve these delicious buckeye knockoffs (taking, of course, the same cross-contamination measures you’d want someone to take for you).

But remember: one man’s favorite is another man’s poison. Your friend may not run right out to buy a year’s supply. If not, well, more sunbutter for you. And the only thing scary about that is how quickly you’ll go through it.

Do you like to eat “free from” substitutes for old favorite foods? Is there anything you draw the line at trying? And are you a peanut butter or sunbutter fan, too?

18 thoughts on “How I accidentally terrified my peanut-allergic friend”