14 Comments
By Molly Never too many cooks in the kitchen

Though I talk about cooking surprisingly little on this blog, I do it pretty much every day. And not only because, being gluten-free, I sorta have to: I love it, too. But I’ve never really considered this a food blog. My focus has always been on stories about gluten-free life, so even though I’m constantly using and making recipes, I’ve steered clear of posting them.

I’ve decided to make an exception, though, because 1) the recipe is worth it, and 2) recipes are kinda like stories, if you think about it. I certainly read food blogs for pleasure, not just utility. A recent New Yorker piece backs me up with the perceptive claim that “cookbooks are like novels…This is what recipes are: stories of pretend meals.”

This recipe—my first ever on this blog—tells a story of the housewarming party my sister and I threw back in August, a story that I have until now neglected to tell. It’s a story of careful planning and intense preparation to serve a spread of food that wasn’t imitating anything gluten-y but didn’t leave anyone thinking, “good for gluten-free.” It’s a story of summer produce and steamy kitchens, told when it’s become just chilly enough to think of those things nostalgically. It’s a story of hard work and great payoff: everyone praised the food and, more importantly, had fun.

It’s also a story of why I don’t usually post recipes. You’ll see what I mean.

The proud hosts, the full spread (minus desserts; I’ll tell you about those soon). The DJ is back there in the corner, too. Kindly ignore.

Socca is an amazing food. I first discovered it through David Lebovitz’s blog, then saw it again on The Kitchn, and then found out it’s apparently Mark Bittman’s favorite food—all of which puts me (and you, should you choose to join) in good company.

It’s a chickpea flour flatbread that can be thin and broiler-blistered, or thick and soft, plain or topped with garlic and onions or pizza toppings, or with the toppings mixed right into the batter. It’s good with every kind of sauce, spread, vegetable, cheese, and seed I’ve ever tried throwing at it. You can make it taste like a pizza or a tart or a frittata. You can even make it into crackers and dip it into hummus, for an incestuous snack. It’s good hot, warm, room temp, and cold. Depending on toppings, it’s vegetarian, vegan, gluten-free, low-carb, even grain-free—though not low-FODMAP, and probably not paleo. (But if you’re going to cheat, you couldn’t choose much better.)

In short, if you’ve never before bought a bag of chickpea flour and think of it as nothing more than the odd aftertaste to some gluten-free cookies, then boy, are you missing out. Try this recipe next time you’re entertaining or just feel like serving yourself an elegant starter.

We worked from a recipe on The Kitchn, tripling it and making four different toppings. We also had two different sizes of muffin tin, so we had regular mini tarts and extra-mini tarts. Socca itself is incredibly simple and forgiving, but my MO in the kitchen (and in life…?) is to take simple things and make them complicated. You can re-simplify as desired.

Get ready for more stunning food photography such as this “process shot” of the plain crusts.

How many does the recipe make? Good question.

As a cookbook editor, I’m well aware that recipes require yields. However, I must inform you we did not count our tartlets. As you can see in the pictures, there were approximately a billion.

The original non-tripled recipe makes two thin 10-inch-diameter soccas, so the total area will be about 2 x π52 = 50π, which you can then divide by the area of your muffin pan cups (about .93752π for a mini or 1.3752π for a regular), which means that if you made the single batch you should get about 57 extra-tiny tartlets or 26 regular-tiny tartlets.

If you make the triple batch as listed below, you’ll have about 171 extra-tinies or 78 regular-tinies (or somewhere in between, if you used a mix of both sizes, as we did, and no, I am not going to attempt any further calculations). This is the most math I’ve done in a long time and if it’s wrong I take no responsibility.

The bare bones you need for socca crust—toppings below (note: you can make a more reasonable batch by dividing each of these amounts by 3) 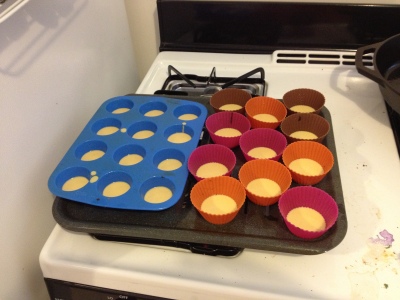 Cute silicone muffin liners, right? Just please, please, don’t be an idiot like us and spray them with cooking spray. IT NEVER COMES OFF.

Use this recipe, also on The Kitchn. We used olive oil and garlic, and only made a half batch because one of our “farm-fresh” zucchinis turned out to be half-rotten. We also added fresh parsley and topped the tartlets with thinly sliced cherry tomatoes. VEGAN! If you want them to be not vegan, you know what to do. 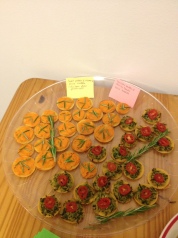 Microwave two large sweet potatoes. Let cool, then remove peel. Save in Tupperware in your fridge to “use in another meal.” Add to compost three weeks later. Meanwhile, mash the peeled sweet potatoes and add all those Italian herbs (oregano, thyme, basil) and salt and pepper. Garnish the tartlets with little bitsles of fresh rosemary. VEGAN! No, you don’t need to add butter to the mash. 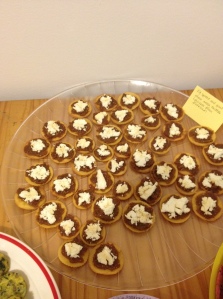 The fig & goat cheese is the ugliest, but so good. Prettifying suggestions welcome for next time.

Make incredible orange-zingy fig jam by simmering a pack of chopped dried figs with water, sugar, orange zest, a cinnamon stick, and a dash of cloves until jammy. Blend until even jammier using an immersion blender or a standalone. Althea masterminded this and thinks other ingredients went in there, too, but she can’t remember. (Brain fog.) So, throw in whatever sounds good to you. Spread tartlets with cooled fig spread, then goat cheese, then a dab of honey for show. NOT VEGAN. But make yourself some nut cheese and sub in agave for honey and you’re golden (provided your sugar wasn’t filtered through bone char…erlack!).

Slice yellow onions thinly. Don’t cut off any digits with the mandoline. Caramelize. No, but really. Do yourself a favor and really caramelize, for longer than 20 minutes. Do it for an hour. Or more. Go crazy. I hear this even works in a slow cooker. Slice granny smith apples thinly and sauté with rosemary and a bit of cinnamon. Layer strands of onions, slices of apples, and blue cheese onto the tartlets. NOT VEGAN. But still probably awesome without the cheese, or with a vegan kind. I really don’t know because I was busy putting blue cheese on everything.

And we all ate happily ever after (or, at least, it felt like we were eating forever). The end.

Have you tried socca before? If not, what’s your favorite gluten-free dish? If so, isn’t it GREAT? How do you like to make it?

Because I’ve always kinda wanted to have something suited to the purpose, I’ve linked up this post in the Gluten-Free Homemaker‘s Gluten-Free Wednesdays carnival….

Leave a Reply to Look at me! I’m a featured blogger. | Based on a Sprue Story Cancel reply