11 Comments
On a serious note

Are you a spoonie?

No, I didn’t mean Moonie. The word spoonie is a catchall term for people with chronic illnesses or disabilities. I first learned it from Rachel’s fantastic blog Do I Look Sick?, and then I started seeing it all over: in other blogs, Tumblrs, Twitter bios and hashtags, even tattoos.

It’s a catchy name, in my opinion, because it’s a bit silly (and therefore a more pleasant self-descriptor than, say, patient or sufferer—ugh) and because it brings together people who share similar concerns but risk never realizing it because of the differences between their particular conditions.

The term comes from “The Spoon Theory” by Christine Miserandino, Christine’s story of explaining to a friend how it feels to live with lupus. Since they were at a diner, Christine used spoons as a visual aid. She collected a pile of them and said that these were her spoons for the day. Everything she needed to do for the day, simple or complex, would require one or more spoons. She then talked her friend through her daily routine to demonstrate the choices and sacrifices involved in living with a limited amount of spoons. There’s a sweet end to the story—click the link to read it in full. (You can also play a demo to get the idea.)

The spoons, of course, are simply a metaphor for energy. Not necessarily a perfect one: After all, sometimes energy just seems to disappear for no reason, which spoons do not, unless they’re being collected in someone’s bedroom awaiting a dishwashing session, or being snuck out from under your nose in a game of Spoons. 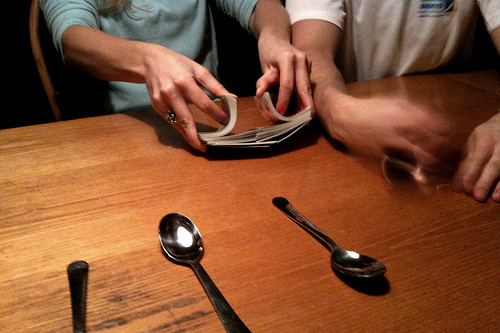 Still, the story spoke to me in a way that stories in this genre generally don’t. It perfectly captured how I feel when my friends want me to, e.g., stay out later than I planned: If I do it, I’m choosing to throw away my entire next day because I’ll be too tired to do anything. And if I’m too tired on a Sunday to do my errands and laundry and cook for the week, those things most likely won’t happen at all that week because I’ll be too tired after work to do them. Not to mention that my body does at least a little better with routine, and I hesitate to lose that edge by messing too much with my sleep cycle. To say all that is so much more whiny and defensive than simply, “I’m out of spoons.”

Of course, everyone has their own energy level, and many healthy people—particularly mature people—do think about how best to parse out their energy to avoid burnout. But I, with my lack of nutrient absorption and all that, have fewer spoons than a lot of my healthy 20-something friends do, and more to lose by using them unwisely.

Lately, despite careful GFD adherence, I seem to have even fewer spoons. Avoiding cross-contamination in a shared kitchen adds extra little steps to my routine, all of which take spoons. Gluten fear probably snags a few more spoons. Plus, giving up caffeine has been like dumping an entire cutlery drawer into the trash. (Upside: I’m sleeping more. Downside: All that sleep is really cutting into my writing time.)

Since learning that I have an actual disease with a real name, I’ve cut myself more slack when I don’t feel up to doing something, and my friends have, for the most part, borne it patiently—though it has been suggested that I use being sick as a crutch for laziness or antisociability. Probably in at least a few cases that’s true (and a tendency I need to work against), but overall it’s more that I see this as a time to be extra careful with my health. To use my energy well in hopes it gets me through this healing stage more quickly. To keep up with the things I most want and need to do now, and save some things for, say, six months from now. To be the best spoonie I can be.

Although I identify with the spoonie community (that’s a fun phrase to say out loud), I recognize I’m extra fortunate in that, with just diet changes and no medication, my energy should increase, eventually. Eventually, I should have more spoons. I’m also well aware that I have a whole lot more spoons than a whole lot of people, and that I’m very fortunate and privileged to have the ones I’ve got.

This is the last day of Celiac Awareness Month, and I started the month intending to be more aware, generally, not just celiac aware. Although I’ve had fewer blogging spoons available this month than I hoped (spent a few of them on giveaway-entering), I’m ending it on the same note, aware not just of celiac disease and gluten sensitivity but also the full spectrum of spooniedom. We’re not the same, but we’re similar. If you’re a spoonie, you’re welcome here. Use your spoons as you choose, and no, I won’t steal them from you while you’re focused on the other cards you’ve been dealt.

How do you feel about the word spoonie?