11 Comments
Breadcrumbs in the wilderness

The kindness of strangers, and a springtime surprise

On February 10th, two important things happened: First, I started my blog. Then, I lost my wallet.

I’d gone out to try to buy a certain size screw that my roommate needed for the counter he was installing in the wall for my very own gluten-free use (my roommates are very supportive and all-around great guys). I’d known I had celiac disease for nearly two weeks, and the weekend before, despite firm intentions, I hadn’t accomplished much of my kitchen makeover. This particular Sunday, I was more motivated. Unfortunately, although I went to three different stores, I didn’t find the right screws. I did, though, manage to pick up a wide array of tupperware and cheap utensils—and drop my wallet.

When I realized what had happened, I frantically retraced my steps. I threw myself upon the cashiers’ mercy in all three stores; in all three stores, they shook their heads sadly. The ground was slushy that day, so a red wallet would have shown up easily; it wasn’t anywhere along my route. It wasn’t on or under the shelves in any of the stores where I’d bent to inspect kitchenware, either, or near any of the hardware sections where I’d put my hand into my pocket to pull out the too-small screw I’d brought for comparison and, most likely, knocked my wallet to the floor.

When I got home to check my bank balances, the debit card had already been used (wisely enough) for an unlimited monthly subway pass. I canceled my cards, submitted a lost-and-found report on the MTA website, and resigned myself to never seeing that wallet ever again.

After the initial shock and self-beration, I got over the loss pretty quickly. I hadn’t been carrying much cash, and cards can be canceled. And enough was going on already that this just didn’t feel like that big of a deal. I already had to redo my kitchen, rework my entire mode of socializing, and eat strictly gluten-free for life. What was one more inconvenience?

Over the weeks that followed, I realized that losing a wallet isn’t just one inconvenience; it’s many. Besides canceling the credit cards, there’s the driver’s license to replace, and a stolen wallet report to be filed at a police station if you want to  replace the license for free; there are the library cards, the laundry card, the store loyalty cards (nooo, not the CVS ExtraCare card!), and the coupons and gift cards you’ve been hoarding; there’s the MTA monthly pass you’d already bought, and the pre-tax prepaid commuter checks you were meant to use to buy more passes in the months ahead; there’s the health insurance card, as I remembered while sitting in the waiting room at my latest doctor’s appointment; and of course, there’s replacing the wallet itself.

Now, I’m a lazy person when it comes to this sort of personal maintenance thing. I barely made a dent in replacing most of the above. In fact, all I replaced right away were the debit/credit cards and the ExtraCare card—because these are basic necessities. I carried these cards, plus a pay-as-you-go MetroCard, in a Ziploc bag for about two weeks before finally buying a $5 wallet from a street vendor. I made overtures toward replacing my insurance card and promised myself to file that police report any day now. I believe that at no point—until now—did I mention to my parents I’d lost the wallet, because my mother has literally “told me so” that my wallet would fall out of my unzipped jacket pocket one day.

Now, I’m glad I moved slow. Because someone out there with a pure and beautiful soul returned my wallet and made it all unnecessary. The wallet slowly wended its way to the old Washington Heights address listed on my driver’s license and from there was forwarded on the winds of the US Postal Service to my current apartment door, where it arrived yesterday. 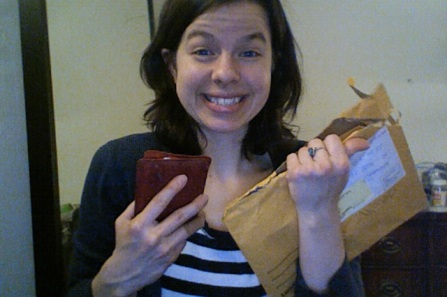 As a kid, I had this annoying habit of saying, “Just what I always wanted!” in response to every gift I opened ever, obliterating any real sentiment in the phrase through overuse. But when I pulled my faithful red wallet (with all its contents intact besides the cash and bank cards) out of the mysterious yellow package, it really was just what I’d always wanted—or, at least, what I’d wanted since February 10th. Up until that moment, yesterday hadn’t been the best day, but this made the end of it great. To whoever it was who returned the wallet—even if you were the same person who took the credit cards—thank you.

I know that yesterday I was joking about springtime, new beginnings, and messages from the stars, but this almost does feel like a sign that my luck is turning, that things are on the up and up. Even my laptop’s camera is working again.

The wallet also held an old fortune cookie slip that read, You have a potential urge and the ability for accomplishment. I’d forgotten all about it, but I think I saved it because I found it a funny, qualified fortune; “potential urge” and “ability for accomplishment” aren’t exactly the most ringing of endorsements. Still, if the fortune felt significant enough to save before, now it feels positively definitive.

This month, along with my Aries friends, I’ll do my best to live up to my good fortune and accomplish a potential urge or two. Removing the former potential urge to replace my wallet contents is a helpful boost that should allow me to redirect my ability to accomplish toward other, more important goals. I will strive to be a worthy recipient of this generous springtime gift. 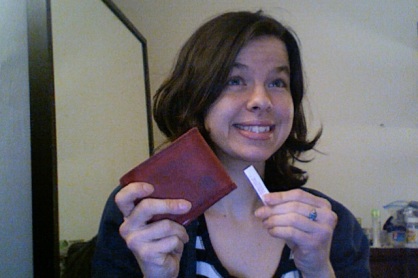 Thank you, thank you, benevolent universe and kind stranger.