8 Comments
Never too many cooks in the kitchen

What’s the best gluten-free pasta ever found in my pantry? (Or, a very belated taste test)

This post is long overdue. In fact, I’m embarrassed by how long. When I pulled up the photos to get going, I realized they were date-stamped August 30, 2013. That means I’ve spent over six months wondering, “What should I write?,” considering this, and deciding against it.

At first, the timing was too close to the Gluten-Free and Allergy-Free Expo in Secaucus (which will be September 6–7 this year, if you want to think ahead); then I had astrology posts to write; and then the holidays hit.

But mostly, I’ve just never cared much about pasta.

Not care about THIS? Really?

Don’t get me wrong, I don’t hate it; in fact, in some preparations—lasagna, you say?—I love it. But pasta’s sorta . . . boring. Too easy. The default vegetarian dish at every omnivorous dinner party. Liable to be mushy and bland. Long before the advent of my gluten-free excuse, my friends expected me to groan when Italian was announced as the choice of restaurant for a night.

I’ve heard it said that those with allergies or intolerances crave the thing that sickens them. But the opposite may have been true for me. As a kid, I didn’t like bread, donuts, many pastries, and most cereals (I did eat corn and rice Chex. See? I knew). I have vivid memories of eating hearty homemade bread—which, mind you, was one of my dad’s specialties—and needing to leave the table midchew to spit out a mouthful that had suddenly become doughy and repulsive.

There were exceptions. I never seemed to have trouble with, say, cake. However, overall, wheaty foods like pasta were things I’d avoid. Though I didn’t start experiencing noticeable celiac symptoms until the end of college, looking back, I wonder if those aversions were an early manifestation of the disease I now know I have.

But enough about me. This post is, oddly enough, about pasta. Long ago now, through some combination of changing taste buds, impulse shopping, and the lure of the forbidden, I wound up with four different kinds of GF pasta in my pantry.

So Sprue Jr. and I invited over some friends and had an awesome pasta taste test. I couldn’t wait to share the results. And then, I did. For half a year. 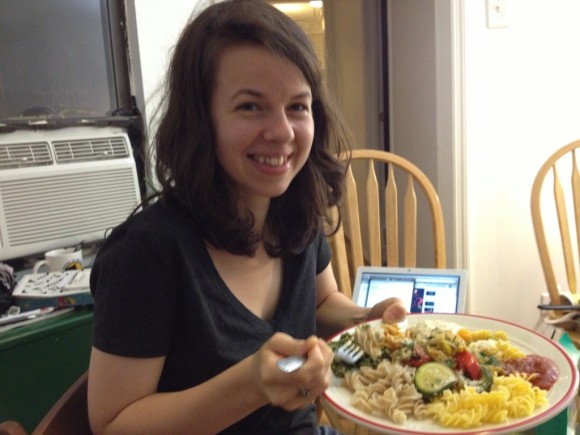 I’d have tried to pass this off as having happened last week, but the hair’s a dead giveaway.

But forget all that. Since I know my opinion about pasta is in the minority, I’ve decided to break my silence. I hope that if you like pasta more than I do or are looking for meatless options to carry you through some Lenten Fridays, my notes—and the notes of my fellow tasters, two of whom are gluten-eaters and all of whom are better qualified than I to comment on pasta—will come in handy.

Head on over to My Life With Food Allergies, where the rest of the post appears, to learn which gluten-free pasta won in our very scientific taste test (corn, rice, quinoa, or red lentil).

What’s your favorite kind of gluten-free pasta? Do you ever procrastinate for months on end before writing a post? I’ll feel ever so much better if you do.

[I shared this at Tessa the Domestic Diva’s Allergy-Free Wednesdays linkup.]