Got worms? A review of The Wild Life of Our Bodies, by Rob Dunn

“You should rewild your gut,” my sister said to me one day, conversationally, over the phone. She said this in part because it’s the kind of thing people say to me all the time, but also in part because she’d just read The Wild Life of Our Bodies (Harper, 2011) and was eager to proselytize. When it comes to books, there’s a vacuum in me that yearns to be filled (perhaps by an intestinal worm—but we’ll get to that later), so I was an ideal soul to target. 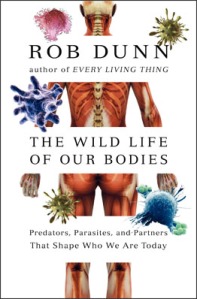 Althea tells me I’m the first person she recommended the book to who actually read it. Too bad, because it’s solid pop science (I, as a generally non-pop-science reader, enjoyed it), and it’s full of a lot of great tidbits for those of us who spend our days preoccupied with parts of the body that normal people are fortunate enough to forget exist.

Subtitled Predators, Parasites, and Partners That Shape Who We Are Today, the book’s central takeaway (which author Rob Dunn makes explicit only on the second-to-last page) is that “our bodies and lives only make sense in the context of other species. Only by looking at other lives do we really understand our own.” Although Dunn is careful to make clear just how much of what he’s writing is unproven, the ideas he presents do make good sense of senseless things.

For instance, why do we have allergies or autoimmune diseases? How did our bodies get so darn stupid? In a childhood game of “stop hitting yourself,” there’s always a sadistic older sibling in the background causing the trouble. When our own insides won’t stop hitting themselves, though, what on earth is to blame? Tell me you haven’t wondered this yourself once, twice, or every day. Dunn wondered, too. The hypothesis he describes in response is sort of the opposite of “stop hitting yourself.” It’s not that some outside force is taking the immune system by the hand and making it hurt itself; it’s that the immune system, used to having a force to act against, is hurting itself out of what amounts to habit—or boredom.

Life, as a wise candlestick once said, is so unnerving for a servant who’s not serving. Like the servant in that awkwardly classist formulation, the immune system, finding its original function unneeded, casts about for something to do with all of the useful skills it’s evolved. And in the process, it manages to mess things up for us pretty thoroughly. Here’s what Dunn thinks went down.

Once, he suggests, we all had intestinal worms. They snuck in through unfiltered water or burrowed up through the soles of our feet, and they made themselves at home within our guts. In response, our immune systems sprang into action, producing antibodies to oust the unwanted guests. But, if the worms stuck around long enough and seemed not to be causing much damage, peacekeeping cells developed, too, allowing our bodies to settle into equilibrium. “This isn’t so bad,” they told the immune system, in essence. “Chill out.”

Now, clean as we are, we have no worms, but our systems, having evolved to defend us, remain slap-happy. In the absence of true parasites, they attack other stuff—stuff that isn’t in itself bad, like pollen or gluten or choice bits of our own intestines. And, unfortunately, in the absence of real threats, our peacekeepers, which might have buffered us against such needless attacks, seem to have assumed we’d be okay on our own and departed on a long, naturally selected vacation.

Dunn adds on to that one more idea—his favorite, he calls it—that a parasite, if present, would also have secreted compounds that could calm our immune systems, even bamboozle it into thinking the worm belonged. Without this gentle resistance to which it is accustomed, the immune response is even more vicious. Like the kid whose arm continues reflexively to bat back and forth even once his brother has tired of the game, our immune systems carry on lashing out—or, really, lashing in, since there’s not much to lash out against—and causing us more harm than good.

The solution? It is, of course, to dose yourself with worms (rewild your gut). Maybe. You’ll have to read chapter 4 to figure out whether or not that’s a good idea.

Other highlights, for me, included discussions of:

Throughout, Dunn uses far clearer analogies and demonstrates a much stronger grasp of science than I have in this post (although my neuroscientist sister did approve its content). For anyone who’s ever wondered what good an appendix is, or what causes Crohn’s disease, or how bad for us city living is really, The Wild Life of Our Bodies is well worth a read. If you do decide after reading it to go get yourself some worms, I hope you’ll tell me all about it.