13 Comments
Breadcrumbs in the wilderness

I’ve spent most of the past couple weeks immersed in apartment hunting, and the search continues. Sometimes, I feel like I’ve spent more time looking for apartments in New York than living in them. This will be my third move since September, 2011, or fourth if you count the move into my friend’s very accommodating parents’ apartment in Soho, where I believe I overstayed my welcome as I looked for my first home. New York, New York!

My new kitchen will be “GUT-RENOVATED WITH BRAND-NEW STAINLESS STEEL GLUTEN-FREE KITCHEN APPLIANCES AND DISHWASHER,” in broker-speak. (Okay, they didn’t say “gluten-free,” but one must read between the lines on Craigslist.) Or, maybe not. Maybe it will still have the previous tenant’s gluten caked into everything. Perhaps there will be a few million of gluten’s cousins, the bedbugs. (Though one broker assured me yesterday that “bedbugs are over.” Phew!)

The apartment will also be approximately the size of a speck of gluten or a bedbug. Everyone loves to joke about this, but so far, truth be told, I’ve lived in a ginormous Washington Heights 2-bedroom and a huge Clinton Hill 3-bedroom and have actually never needed to climb over my own twin bed in order to get to my dresser. Since the plan is to move to East Harlem, I may very well experience just that.

I also may not quite get the kitchen of my dreams—counter space is tough to come by in a city that never cooks. Then again, in my current kitchen I’ve been confined for several months now to this: 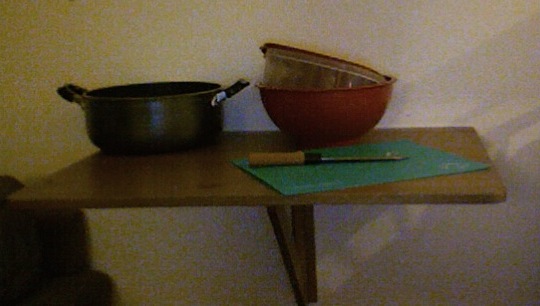 …my own little messy gluten-free workspace, which my roommate was kind enough to install for me, far away from the toaster oven and right next to the large and luxurious couch that will most likely not fit through the front door of my new building, much less in the apartment’s living room.

So I’ve learned a thing or two about lack of space, but in my new kitchen, I’m sure to have more than I have now, because we will have a gluten-free household! (Pretty much, anyway. My sister, and soon-to-be roommate, needs her Grape-Nuts—though we’ve been scouting out gluten-free Gnuts recipes.) Yes, I will be making the fateful switch to the much-touted 95% gluten-free kitchen, so the entire kitchen should be safe for me. This will make cooking more relaxing, at least until the next time I bake plastic wrap into my hot cross buns.

I’m nervous, but excited! Now enough time wasting; I’ve got to get back to hitting refresh on Craigslist. Stay tuned. I’m sure there will be an update…any…day…now.

Tell me about your gluten-free kitchens, your real estate adventures, your Grape-Nuts recipes—anything, really, to distract me from the grim ticking-down of days until June 1st, lease-starting day. Hopefully.

Last summer, I had a bit of a scare. As I lay in bed one night, my leg became oddly . . . itchy. I scratched, but the itch returned. My hand crept down again and again, even though I told myself I was making it worse. Finally, I yanked off the covers and took a peek. There, on my leg—on MY leg—were three small bumps, all in a row.

Google, which I raced to check, confirmed that the three-bump pattern was linked to bedbugs. I stripped my sheets, flipped over my mattress, and found, around the edges, small black bits that I was certain resembled the Google images of bug-infested beds.

Google also told me it was not recommended to vacate the premises or sleep in a different room, which risks spreading an infestation. In a rare instance of disobedience to Google, I refused to return to my room. Instead, I sat huddled and horror-stricken in my dining room at my computer late into the night.

The following days were bleak. I’m not proud to say I threw out a whole lot of things, washed and dried everything else several times and then kept it all in trash bags, getting dressed at my front door because I was so scared I might spread the bugs. I dragged my roommate out to buy an expensive vacuum from Manhattan’s only 24-hour hardware store, I thought about nothing but bedbugs, I told several people we had bedbugs, and I even canceled a visit to Buffalo to see my sister because—again—I feared spreading the bugs. I slept little and cried a lot. In short, I completely lost it.

And then we didn’t have bedbugs after all. The inspector came, looked at the “samples” I’d been collecting, looked at my mattress, and laughed. The “infestation” on my mattress was dust, collected over a year of not vacuuming the mattress. The samples were of, well, baby beetles and cockroaches, which is still gross but better than the alternative. The panic I’d undergone was just that: panic. So . . . phew. Embarrassing, but . . . phew.

Good things that came out of my bedbug scare include:

– I threw out some old clothes that I had no business wearing in public anyway.
– I bought a vacuum.
– I learned a valuable lesson about finding out before freaking out.

– Bedbugs are not found in wheat, rye, barley, and oats (though look out for grain weevils).
– Gluten cannot move around of its own volition (though flour particles can drift around in the air for a while, according to some sources).
– Bedbugs do not give bread its characteristic elasticity and stretch.
– Gluten does not suck your blood.

On to the fun part: the similarities.

Both are very small.

But it’s a myth that bedbugs are microscopic. They are more like the size of that single crumb that can take someone with severe gluten sensitivity out of action for days or weeks.

Both affect some people and not others.

Bedbugs are picky creatures. Monogamous, even. A couple can sleep together in the same bed every night and the bugs might attack one of them but not the other. Relatedly, bedbugs cause reactions in some people and not in others, and the range of response severity is wide (some rare people are even allergic to the point of anaphylaxis). Gluten, too, affects some people and not others; a couple might eat the same pasta dinner every night and the gluten might destroy one set of intestines but not the other. And for those lucky affected individuals, symptoms range from minimal to life-threatening.

Bedbugs can be spread through staying in hotel rooms and taking buses and other modes of transit, where they are dislodged from luggage or traveler’s clothing and hide out awaiting you. Brooklyn writer John Hodgman claims that the first thing he does upon returning home after a trip is strip naked and wash the clothes off his back—and that this is what every careful human should do to avoid bedbugs. Similarly, as we all know, traveling is difficult for those with gluten issues. You need to pack safe food to bring with you or locate gluten-free dining establishments, or else risk encountering gluten along the way. There has been some concern about the bedbug epidemic’s effect on New York City tourism, and in my opinion the small number of gluten-free-only establishments per capita here in the Big Apple should scare away tourists, too.

Both can cause an itchy, painful skin rash.

Yes, I chose less severe images than I could have.

Both hide in cracks and crevices.

According to the University of Kentucky, bedbugs camp out “along and under the edge of wall-to-wall carpeting, especially behind beds and sofas; cracks in wood molding; ceiling-wall junctures; behind wall-mounted pictures, mirrors, outlets and switch plates; under loose wallpaper; clothing and clutter within closets; and inside clocks, phones, televisions and smoke detectors.” According to Jane Anderson at About.com, gluten hides in the crevices of your toaster, scratches in nonstick pans, pores of cast iron pans, scrapes in cutting boards, and minuscule cracks in spatulas, spoons, and rolling pins. And yes, people do have concerns that both gluten and bed bugs are in your computer (bugs in the warm hard-drive-y area, gluten in the keyboard and mouse, and both, of course, swarming the internets).

I discovered a whole world I never knew existed (and sort of wish I still didn’t): bedbugger forums. These are places where the afflicted gather to share horror stories about the extent of their infestation, botched exterminations, and quixotic home control methods. They are zones of intense fear and fear-mongering, stoked to ever greater levels, and they are not a good way to avoid the whole stress thing. Your life is over!, many of the posters trumpet. You can run, but you’ll take them with you! Buy a PackTite or all is lost! Similarly, although celiac disease forums often feature reasonable, supportive posts, they also have plenty of hopelessness to go around. If you want to send yourself into a downward spiral of obsessing over your illness, you can manage it by poking around celiac.com. Actually, a very thoughtful and perceptive post on one of those bedbugger forums made the connection quite well:

“I just wanted to say that I have a chronic, potentially debilitating illness and when I was first diagnosed I went to some internet forums and after reading story after story, thought my life was over. But it turns out most people with this illness actually end up living full and painless lives (these days, anyway) but these were not the people posting on the forums! . . . people come together in these support forums when they are not having success solving their problem, or when they need understanding or advice, not when the problem is under control and they aren’t thinking about it anymore. So we are not getting an accurate picture of success and failure here.”

Both have the capacity to drive you completely and utterly bonkers. . .

Especially if you’re me. Both are linked to stress, anxiety, and depression. The mechanisms are not completely clear from research in either case, but from a common-sense standpoint, it makes perfect sense. Bedbugs and gluten cause physical pain and are hard to eradicate, a bit disturbing, and potentially thought-consuming. Having them around is stressful? Um, obviously. It’s easy to become anxious that either might be present at any time and in any place, especially with all the hype surrounding both.

. . . but not if you deal with the problem correctly, in about the same way.

– Step 1 is to make sure you actually have a problem (by inspection or by diagnosis).
– Step 2 is to do your research carefully, not believing everything Google tells you.
– Step 3 is to learn to love cleaning.
– Step 4 is to put into practice all the necessary cautionary measures you can.
– Step 5 is to be patient.
– And Step 6, though really you should be doing this all along if you can, is, as in many things, to stay calm and avoid catastrophizing. Life will go on, even if you do come across bedbugs or gluten.

Now that I’ve finished grossing you out, are there any similarities or differences I’m missing? Have you had any experience with bedbugs? If so, I’m so sorry! Any other tips for handling it?