Is gluten sensitivity fake? Maybe. I’ll wait while you read the study.

Recently, if everyone you know is anything like everyone I know, they’ve been sending you articles with headlines like:

And, if you’re anything like me, you’re pretty annoyed about it.

The study itself focuses on non-celiac gluten sensitivity (NCGS). Peter Gibson and the other authors of a milestone 2011 study providing evidence for NCGS decided to check their results. They’d found no reason why gluten would cause digestive symptoms for non-celiac people, so they wondered if something went wrong in their first study—if there were confounding variables.

In their new study, they strove to control for those variables and wound up finding “no evidence of specific or dose-dependent effects of gluten in patients with NCGS placed diets low in FODMAPs.”

Unfortunately, no one is actually reading the study.

Most of the above “articles” don’t link directly to the study (which can be found here and, by the way, came out many months ago). Instead, they link to a write-up at Real Clear Science, suggesting that’s all they read. Real, clear, and scientific though that write-up may be, it is not enough to get the whole picture, especially if one reads it selectively.

Had writers taken time to learn something before jumping on the trending topic, the headlines may have been different. Or maybe not. After all, we clicked on them, didn’t we, and isn’t that the point?

The articles feature scant information, laughable errors, and a hearty, triumphant whiff of “I TOLD you nothing was wrong with you”—missing what the researchers take as a given: something is wrong. It just might not be gluten.

Now, one study does not overturn all the other research that’s been done on NCGS. Rather, it introduces doubt—and an opportunity to provide people with better treatments for the pain and discomfort they do indeed experience.

Since no one is bothering to read the study, here are some key points:

Like Jenny Craig, the researchers provided three meals a day, which were:

After establishing a baseline, the researchers mixed a little gluten, a lot of gluten, or a placebo into the meals. The trial was double-blind (so no one, including the researchers, knew who was getting what when) and cross-over (so participants spent some time eating each of the three kinds of meal).

Of course, the click-me-click-me articles don’t get far beyond bullet point #1. As such, they aren’t worth getting worked up over, though that hasn’t stopped me from practically combusting every time a friend broaches the topic. People are finally paying attention, and in all the wrong ways. It drives me bonkers.

The comments are, if possible, worse.

Many of them seem impervious to new ideas and scientific developments. “Of course gluten sensitivity is real,” they bristle, “and I’m proof.” They reel off symptoms they once felt, spinning miraculous recovery tales. Though I’m glad they feel better, by dismissing scientific inquiry, they reinforce stereotypes of the gluten-free community as irrational and dogmatic.

It’s understandable folks feel attacked. No likes to be told they’re wrong, especially in the bald, provocative terms of these headlines. In particular, no one likes to be told our symptoms are psychosomatic. We don’t appreciate the idea that we aren’t in perfect rational control. It sounds like an implication of stupidity, attention-mongering, or craziness. I get it: I’ve been through the “you must be stressed” talk. I’ve been prescribed anxiety medication. I’ve left in a huff.

But the placebo/nocebo effect is well documented. It may make us uncomfortable, but writing it off won’t get us anywhere. Psychosomatic symptoms aren’t “all in your head”—that’s the point. They start in your head, but they affect your body, too, in very real ways. (Of course, when other illnesses are misdiagnosed as anxiety or depression and therefore mistreated, that is no good.)

Sometimes, people expect to feel glutened, and so they do feel glutened—gluten or no gluten—whether or not they have a gluten-related disorder. In this study, it happened. That’s not all there is to know about NCGS, but it demands recognition.

Other commenters rail against the study’s authors’ “obvious bias” or claim it was “funded by the wheat industry,” coming off as paranoid and histrionic. Yes, the study authors are closely involved with researching the low-FODMAP diet, which introduces some bias—but it also means they’re passionate and educated about the topic and, therefore, well suited to research it.

I too have a horse in this race. I edited Sue Shepherd and Peter Gibson’s books, The Complete Low-FODMAP Diet and The Low-FODMAP Diet Cookbook (the latter of which you’ll see on shelves very soon!). So, increased attention to FODMAPs benefits me, at least indirectly. 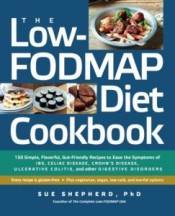 That said, I was a believer before the books ever crossed my desk and before I worked at The Experiment. Working on the books, learning the science behind them, and reading positive reviews by those who have tried the diet have only deepened that belief. I wish that articles would focus more on promoting this revolutionary treatment (to my knowledge, the only evidence-supported diet for IBS) and less on dissing another.

My guess? There’s room for both diets. And there’s plenty of room for more research.

What’s your take on all the hullabaloo? Have you turned up any really good reporting on these issues? Would you be interested in more posts about FODMAPs down the line?

22 thoughts on “Is gluten sensitivity fake? Maybe. I’ll wait while you read the study.”